Learn about the Poor People’s Campaign

The Poor People’s Campaign, A National Call for a Moral Revival

Help plan for the June 20 March in Washington DC!

6 p.m. on the 2nd & 4th Friday of each month
Sanctuary of All Souls Church, corner of Main and Hope Streets, Greenfield Includes a light supper prepared by Stone Soup Cafe!

Video  (will open in Facebook; will add other video when available) 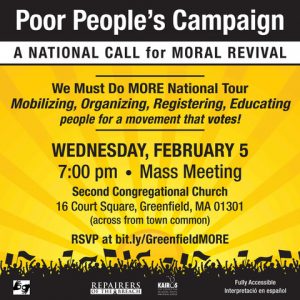 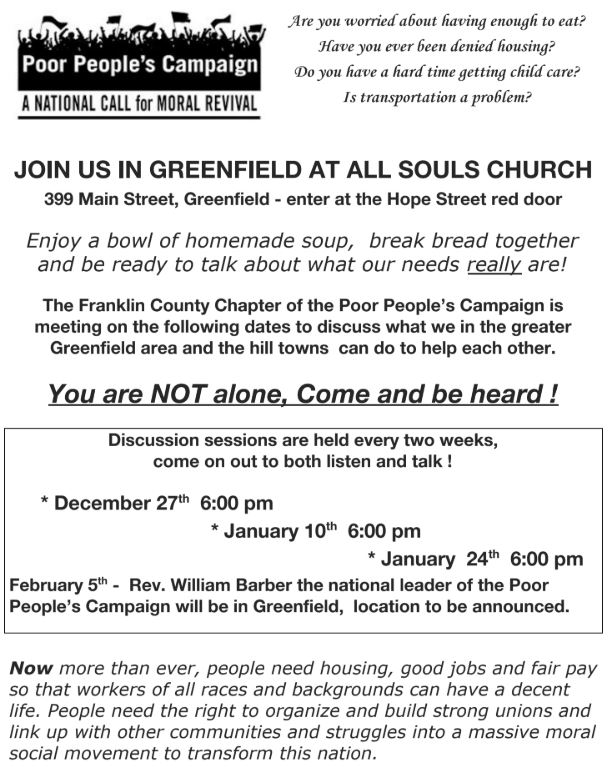 The information below dates from the spring and early summer of 2018.

Racial Justice Rising is supporting the Poor People’s Campaign. If you have questions about the PPC in the local area, please contact Ruth at ppc@racialjusticerising.org.

The Poor People’s Campaign asks if you would please contribute to this movement with any donation you can afford. Your contributions support signs, banners, venues,  jail support, transportation, and all the expenses incurred as the movement grows.

Read the letter from Reverends Barber and Theoharis on Memorial Day and Week 3’s theme here.

Watch clip from the June 23 rally in Washington DC here.

Read the report on the Massachusetts PPC rally on June 11 here.

Read the report on the Massachusetts PPC rally on May 28 here.

Read the report on the Massachusetts PPC rally on May 21 here.

Read the report on the Massachusetts PPC rally on May 14 here.

Photos from the May 21st Boston rally: 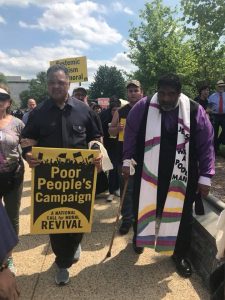 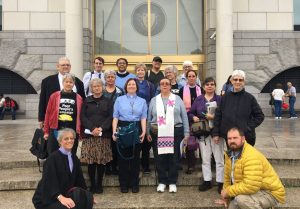 Photos from the May 14th Boston rally:

Our Campaign is just getting started. Both local and national media are taking more notice.

Thank you to all who came out for Monday’s Rally and Sit-in at the State House to address systemic racism, voting rights, immigration justice, Islamophobia and Indigenous rights. We’re so proud of everyone’s hard work and commitment to the movement!

Over 200 of us rallied on the Boston Common, and 16 of us were arrested last night at State House, demanding lawmakers confront systemic racism as the Massachusetts Poor People’s Campaign Intensifies. This morning, all 16 cases were dismissed by the Boston Municipal Court Judge!

But our fight is just beginning. Keep the momentum going by joining us at the Boston Common on May 28th and 29th!

For Week 3, our theme is The War Economy, Militarism, and Gun Violence. We will start with a Veterans-led War Economy Encampment on Monday (Memorial Day) at noon. On Tuesday, May 29 we’ll hold a rally at 2pm on the steps leading up from Boston Common to Beacon Street across from the State House . Sign up to participate!

We have now started 40 days of sustained, nonviolent moral fusion direct action in over 30 state capitals and the District of Columbia.

In states across this nation, our movement is gaining strength and we are already beginning to shift the moral narrative. On April 29, we gathered at Pullen Memorial Baptist Church in Raleigh, NC for a final mass meeting that was streamed across the nation. Watch the video on the Poor People’s Campaign Facebook page. 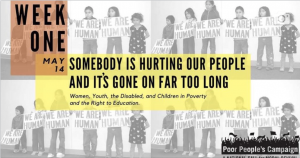 NONVIOLENT – we model nonviolence in this culture of violence, holding up the humanity of every person

MORAL – not left or right, but right and wrong: a new call for a moral revival in this country, led by the poor

DIRECT ACTION – our bodies are conveying a message of people’s power, which won’t be turned back

Read the PPC’s Demands and Opportunities.

On June 23, there will be a huge international rally in Washington, D.C. 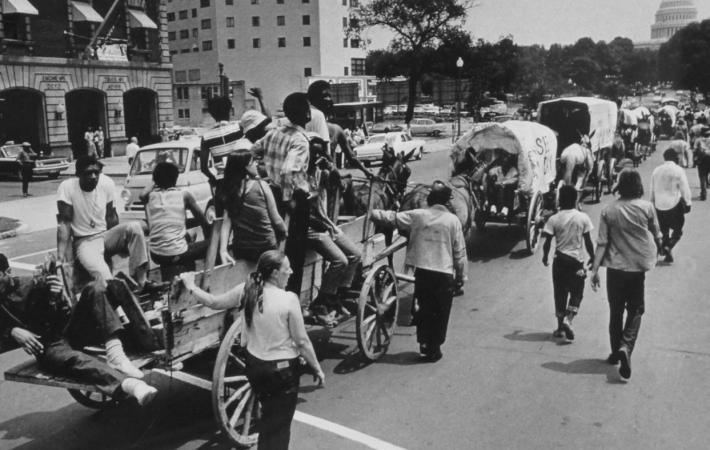 From the original Poor People’s Campaign 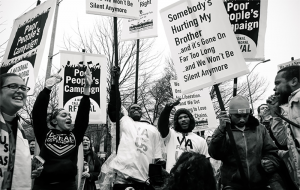 In the summer and fall of 2017, the Poor People’s Campaign: A National Call for Moral Revival was “on tour,” with stops in over 15 states across the country. At these stops, the Campaign held mass meetings, press conferences, truth commissions, and other events.

“Fifty years after Rev. Dr. King and the 1968 Poor People’s Campaign declared that silence was betrayal, we are coming together to break the silence and tell the truth about the interlocking evils of systemic racism, poverty, ecological devastation, the war economy and our distorted moral narrative,” the Moral Agenda reads. “We declare that if silence was betrayal in 1968, revival is necessary today.”

The Poor People’s Campaign, a multi-year effort, will launch on Mothers Day, May 14, with 40 days of moral action across diverse issues and geography in at least 41 states. Actions will include rallies, education and organizing, cultural arts events, nonviolent direct action, and fusion coalition building.

During that time, five Moral Monday actions will occur at Statehouses around the country, each Monday with a different theme. (Transportation to Boston from Western Mass is being arranged for May 14th and possible carpool coordination for all five Mondays.) The events will begin at 2 PM with a rally followed by optional non-violent direct action.

Anyone planning to attend the rallies is welcome to come to a non-violence direct action training, even if not planning to risk arrest. Organizers say that anyone who is considering arrest needs to attend a training, and those who want to act in support roles should as well. See western MA training dates below.

Dates and the current themes are:

May 14 – Children, Women, Youth, People with Disabilities, and the Right to Education

May 21 – Intersection between systemic poverty and racism, immigration, voting rights

June 11 – Everybody has a Right to Live – Wages, Housing, and Services

On June 23, there will be a huge international rally in Washington, D.C.

To prepare for the 40 days, organizers are holding nonviolent direct-action trainings in 40 states, including Massachusetts, as well as the District of Columbia.

Sign up for a PPC Non-Violence Direct Action training in Western MA, a series of which will be held through the spring. The first training, which was held simultaneously in 39 other states, was on Saturday, April 14th in Springfield MA and included a live link with Rev. Barber.

If you are already trained in non-violent civil disobedience, however, you may be qualified to train as a Peacekeeper for demonstrations, rallies, and marches. Contact the Sojourner Truth School for information.

Some roles to consider:

For more information on the PPC trainings, see here.

Background to the National Campaign

On December 4, 1967, the Rev. Dr. Martin Luther King Jr. announced plans for a Poor People’s Campaign to organize towards transformative actions to end poverty, racism, and militarism in America. At that time, the nation was deeply divided, particularly by the issues of racial justice and the Vietnam War.

And yet even after Dr. King’s assassination in April 1968, this multi-racial mobilization of the poor went forward, mobilizing caravans that converged in Washington, D.C. to erect a shanty town on the National Mall that came to be known as “Resurrection City.”

The Poor People’s Campaign culminated in a Solidarity Day Rally for Jobs, Peace, and Freedom involving more than 50,000 people on June 19, 1968. Over the past 50 years, social movements have continued the struggle against poverty and the interrelated issues of the war economy and militarism, racism, and ecological devastation. They have won some gains, but even the handful of select indicators in this report make clear that we are still living in a system that serves a tiny minority at the expense of the rest of us.

The Poor People’s Campaign: A National Call for Moral Revival is working with the Institute for Policy Studies to produce an analysis of the Campaign’s four core issues: racism, poverty, the war economy/militarism, and ecological destruction. This preliminary analysis was released at the launch of the Campaign in Washington D.C. on December 4, 2017. Initial findings reveal that, by many measures, these problems are worse today than they were five decades ago. It is in all of our interest to recapture what Dr. King called the “revolutionary spirit” needed to solve these systemic problems.

Learn more about the Campaign:

FROM THE MASSACHUSETTS PPC:

If you are considering risking arrest at one or more of the Mondays, you need to take a training, even if you have prior non-violence training. To register, go to this link:

If you are already trained in non-violent civil disobedience, however, you are qualified to train as a Peacekeeper for demonstrations, rallies, and marches, May 12. Register here:

And you don’t have to be trained to attend a rally and, in fact, we are looking for LOTS of folks to attend the 5 Monday Statehouse rallies.

There are many ways to be involved in the campaign beyond non-violent direct action (e.g., education and outreach, music, art and more). Contact Massachusetts@poorpeoplescampaign.org for more info.

Connect with the Statewide Campaign: