January 11, 2022 – A Conversation About Racism: Staying Curious, Moving Forward, and Being Part of the Solution

February 1, 2020 – A Discussion of Reparations with Dr. Amilcar Shabazz

January 4, 2020 – Homelessness: A Discussion with Arise For Social Justice

March 2, 2019 – Racism in the Prison Experience: An Overview From the Outside, Voices from the Inside

November 3, 2018 – Wisdom From The Indigenous Elders

June 3, 2017 – The Real Story of American History: My Story, Not His Story with Naimah Muhammad and Kathleen Anderson

February 4, 2017 – The Evolving Face of Housing Discrimination with Elizabeth Bridgewater

January 7, 2017 – The Road to Freedom: Anti-Slavery Activity in Greenfield with Momodou Sarr and Joan Featherman

December 3, 2016 – Taste of Brazil: The Story of Capoeira Dance with Tuzinho

October 1, 2016 – Building Relationships With Our Community and the Police

August 8, 2015 – What Reparations Forces Us To Do, with Chris Tinson

May 2, 2015 – Latinos in the U.S.: Colonization, Diaspora, & Racialization, with Annie Rodriguez

January 10, 2015 – Race & Class: Past and Present Connections with Angela Berkfield 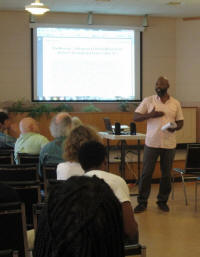 November 1, 2014 – Reparationists are the New Abolitionists, with Woullard Lett

September 6, 2014 – Cracking the Codes, The System of Racial Inequality, a film by Shakti Butler with conversation facilitated by Kara McLaughlin and Rachel Stoler

May 3, 2014 – A Destructive Invisible Reality: How Privilege Hurts Us All, with Dottie R. Morris

February 1, 2014 – Walk Right In: The Story of the Yale Summer High School. Film and discussion facilitated by Darnell Williams and Meg Maccini

Oct 27, 2013 – Conversations Toward Racial Healing: Pleasantville:  Nothing is Simple as Black and White, film with discussion, facilitated by Keely Malone